" 'OLDER AND WISER' NEVER APPLIES TO ME."
Over the past months of academic insanity, there were a couple of releases—-an album and a film—-from two artists whom I love and whose work I always look forward to, and my thoughts on them have been steeping for a while (in one case for a VERY long while). Although these works are in different media and are by artists who obviously have very different experiences, methods, and visions, they share a certain kind of advancement into uncharted territory. Together, they seem to me to represent a very happy deepening and maturing of extremely bright talents so intense that they might easily have burnt themselves up entirely in their glorious initial blazes. But we now have two reassuring signs that these artists are in for the long haul, intent on bodies of work in which each successive addition only enriches and sheds more light on the whole. 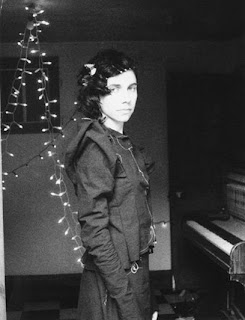 It’s been many months since PJ Harvey’s most recent album, White Chalk was released—-I have it associated on my personal timeline with the beginning of French 201, back in autumn of last year—-and I see I blurbed a bit back then about my anticipation of it. It didn’t shatter me immediately the first one or two times I listened to it; I don’t know if that’s because I’m that much older and less shatterable or because this is the kind of album that has the patience to shatter you gradually, but that is exactly the cumulative effect it has had on me over repeated listens.

White Chalk is certainly a risky departure. When I purchased it at the Sonic Boom Records outlet in Seattle's Fremont neighborhood (a location that has since departed permanently, it sadly seems), the clerk told me he wished that it had displayed more of Polly’s well-known ability to “rock out.” It is true that one thing this album decidedly does not do is “rock out"; there are no “50 Ft. Queenie”s or “This Wicked Tongue”s here. As she has explained in interviews, she banned the use of electric guitar and snare drums (staple “rock” instruments if there ever were any) for this album, learned to play the piano from square one, and mostly forsook her trademark throaty passion for a markedly higher, sometimes falsetto singing voice that sounds frankly girlish in comparison to classic PJ. The instrumentation is almost exotically old-fashioned: piano, zither, acoustic guitar, harp, etc. There are drums and percussion, but placed low in the mix and played to extremely unusual effect—-the shimmering curtain of high-hat percussion to accompany the swooping piano in the refrain of “The Piano,” the bongos on “White Chalk” and bass drum on “When Under Ether” providing repetitive heartbeats rather than rhythmic anchors, etc. Repeat listens to older PJ albums (including, in its own wonderful way, Rid of Me) always reveal a new layer of texture in the sound, some detail so well-integrated and right that it wasn’t specifically distinguishable on the first taste. That unobtrusive layering (always, it should be noted, in service of the song—this is not prog rock!) is very much still intact on White Chalk, but the repertoire of sounds is expanded even further and deployed in an entirely unpredictable way; anything resembling a PJ Harvey “formula” has been discarded.

The risk pays off in spades. This is the strongest PJ Harvey album since To Bring You My Love. Her last studio album, 2004’s Uh Huh Her, was scattershot, the result of what sounded like too often half-completed experimentation. As Morrissey has insisted, you can actually judge an album by its sleeve, if not a book by its cover; whereas Uh Huh Her came with a spiral-bound cover design featuring a vérité photo to visually signify the on-the-fly, homemade creative impulses behind it, this record’s beautifully (if severely) composed cover design give the listener an excellent clue as to what’s inside. That turns out to be something stoically rural, a return to Harvey’s biographical roots (Nick Cave once wrote a ballad about her called “West Country Girl”) where, not altogether surprisingly, she locates the same perennial thematic fixations that have long driven her work: nature (“Grow Grow Grow,” “The Mountain,” and the wonderful title track); being female (“When Under Ether,” “The Piano”), religious/spiritual metaphor (“The Devil,” the plaintive lullaby “Dear Darkness”), and beleaguered, impossible love (“Broken Harp,” “Silence”). “To Talk to You” and “Before Departure,” the album’s only two tracks to not quite reach the heights of the others, still seem to have their minor niches in this set; they serve to rest the album’s second half on a more contemplative note before the spectacular dénouement of “The Mountain,” which, while not exactly a retread of To Bring You My Love’s brilliant final track, “The Dancer,” attains the same heights of majestic tragedy, finally transcending words into what sounds like the hard-won victory of pure vocal emotion. 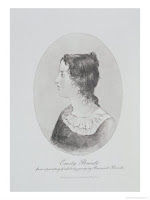 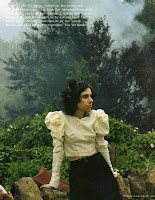 I thought frequently of White Chalk and Polly Harvey’s rural Englishness in general this past quarter, when I took Comp. Lit. 351, a course called “Love, Sex, and Murder in World Literature,” which featured an in-depth reading of that worthy literature course standby, Emily Brontë’s Wuthering Heights. The 19th-century comparison seemed more and more apt the more I listened to the album and discussed in class the themes of nature, love, and religion/spirituality in Brontë’s novel (and as I extracurricularly explored the different take on those themes in the best-known novel by her sister Charlotte, Jane Eyre). It’s not just the record’s sonic and visual qualities that make that so; the narratives in many of these songs strategically employ the same elements Brontë does in her novel (the story of “The Devil,” for example, with its innocent girl drawn gladly into the not-so-innocuous wilds; or that of “Grow Grow Grow,” whose “twisted oak grove” is such a Brontë-esque setting). Possibly because their authors and many of their protagonists are women, Wuthering Heights and Jane Eyre sometimes seem to have an aura around them of being literature for bookish adolescent girls. In fact, they are chock-full of just the kind of well-evoked disquiet one finds in the work of PJ Harvey, a similarly hardly-just-for-girls female artist still too often thought of as making “women’s music” over a century and a half later. But, as one studies the long history of creative expression (even if you limit that to mean only the post-Gutenberg era), a lifetime comes to seem just a drop in the bucket. Some fortunate people, however, create works—like Wuthering Heights, like Jane Eyre, like White Chalk—that have been and will remain relevant for many lifetimes to come. 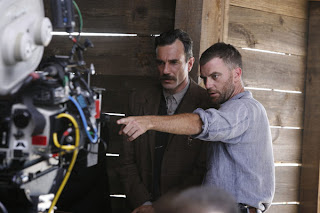 Paul Thomas Anderson’s intimate epic There Will Be Blood also takes him much further into the historical past than he has ever gone before, and that’s just the beginning of his newly-explored cinematic territory’s unfamiliarity. One’s first impression of the film as it relates to Anderson’s previous works might be that it is much more restrained; the long takes are still present, but their effect usually relies more on the lighting and framing within the shot than the impressively elaborate Steadicam movement of his prior films (particularly Boogie Nights and my beloved Magnolia). But that moderate degree of relative formal stillness doesn’t really render the film “restrained,” as anyone who has seen it would attest. It’s Anderson’s twist on classical, epic filmmaking, suitable for keeping the film modern while evoking its period (which is mostly the turn of the 20th century, with a now-famous epilogue set in 1927, the year in which the film’s source novel, Upton Sinclair’s Oil!, was published).

There Will Be Blood is virtually Godardian in the looseness of its adaptation; like the French master’s adaptations of Dolores Hitchens (Bande à part), Alberto Moravia (Le Mépris), and Lionel White (Pierrot le fou), Anderson’s film is best described as selectively sharing certain elements, characters, and plot bits with Sinclair’s novel, using them to leap into territory the novel never goes anywhere near. Anderson is not the polemical propagandist that Sinclair was (though, having read Oil!, I can vouch that Sinclair does not really portray the character who becomes Daniel Day-Lewis’s Daniel Plainview in a light any less ambivalently human than Anderson does, just to a different end). He’s more interested, as always, in contradictions and the effects of human weakness than prescriptive moralizing.

Then there’s the music. I hear that Radiohead has become worthy of the attention they lost (from me, certainly not from most) after Kid A, but I haven’t yet had the chance to confirm that. However, Radiohead bassist Jonny Greenwood’s music (along with non-original score by Arvo Pärt and Brahms) is just as striking here as Jon Brion’s has been for Anderson’s previous films. In a striking parallel to PJ Harvey’s aesthetic strategy, Anderson revealed in interviews that he and Greenwood discussed restricting themselves to turn-of-the-20th century instrumentation, which filmmaker and composer would then avoid using in any way resembling the way it would typically have been used at that time. The result is ominous and unsettling, and that description also goes for the film and its trenchant chronicling of moral decay. 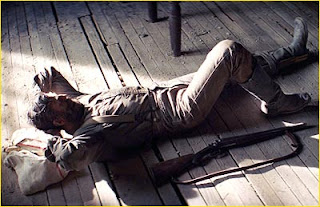 While pondering There Will Be Blood, I keep thinking about the metaphor of oil and water. There is clearly that effect between the film’s two main characters, Daniel Plainview and Eli Sunday (Paul Dano). But there is also a crystal-clear purity to the character of Daniel Plainview, exemplified by the honest, brutally hardworking persistence demonstrated in the film’s near-silent first 15 minutes or so—-a persistence that somehow becomes pitch (or oil) black by the film’s end (perhaps persistence, like courage, is a morally neutral trait too often taken as an unqualified virtue). The film is topical, but its topics came long before and will far outlast our current oil-related shame. These themes, religion and business, are as everlastingly American as apple pie, and they’ll probably continue to necessitate critical thought for as long as this nation exists. In this film, unchecked religion becomes rank hypocrisy; unchecked ambition becomes destructive, exploitative, and inhumane (as in Citizen Kane, hence the many comparisons). It’s watching the development of those obvious-sounding truisms, particularly as they manifest in the very troubled relationship between Daniel and his son, H.W. (those initials!), that the film enraptures. There’s such evident pleasure taken by filmmaker and actors in the process of creating that development that, although the film is easily the most pessimistic of Anderson’s œuvre to date, the pleasure extends naturally to the audience, as well.