"AFTER THIS"
The story and themes of Alice McDermott's After This are not new. This brief but very finely wrought novel takes on nothing more or less than the ups and downs of one suburban American family (this one happens to be Irish Catholic) from post-WWII optimism to Vietnam-era confusion. McDermott's grasp of the historical moment is knowledgeable and sensitive, and she sugarcoats nothing, but what she has created is not a sweeping historical panorama or retrospective weighing of American right or wrong; McDermott doesn't seem to be particularly concerned with capturing the Meaning of a Cultural Moment. It is, however, precisely the novel's apparent objectivity--its distance, its preference for potently evoking the local experience of the joy and pain of the march of time rather than interpreting it--that gives it weight and, not despite but because of the distance of its perspective, an inconspicuous but permeating empathy. 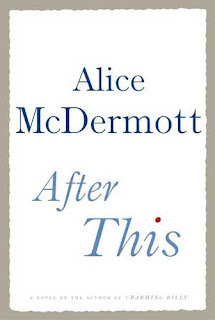 After This is thus, in the best possible way, an exercise in style and structure. That is not to say that there's anything "experimental" or "avant-garde" about it; Alice McDermott is not Donald Barthelme; she is not really interested in showily scorching the earth of the prose world. But McDermott has staked the uniqueness of her readers' experience primarily upon the novel's seemingly cool, sometimes almost entirely dispassionate tone and lacuna-ridden structure (McDermott clearly cares nothing about congratulating herself for her literary prowess and sophistication, but After This puts its own inevitable ellipses to impressively self-aware use. The novel appears to compile what amounts to a rather small, somewhat desultorily connected handful of episodes experienced by the two generations of the Keane family of Long Island. But one feels that McDermott has devoted vast amounts of time, thought, and even preparatory writing to an infinitely detailed rendering of the entire inner and outer life of each of the novel's characters, then painstakingly eliminated everything save for those portions she feels are most rewarding and rich in their eventful opacity, in their potential for letting us know her characters from the most authentic and least reductive angle.

The effect is that of observing an array of starkly glistening iceberg tips protruding through the surface of a wide ocean, and from those tiny but salient signs immediately, wordlessly knowing--feeling deep in your bones, in all their detail, without the need for continued explanation and worrying-over of the issue--the inexpressibly vast seas below.