"YOU WERE JUST MY IN-BETWEENER" 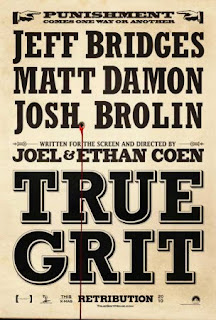 Hardly a masterpiece, yet in no significant way a failure, the Coen brothers' latest is, in its own way, about as fascinating--and cold--an exercise as Gus Van Sant's undeservedly despised 1998 Psycho remake (from my point of view, that comparison is no insult). Despite Josh Brolin's being in it for about five minutes--leading one to wonder why the top billing for him and not for the endearingly artless young tomboy Hailee Steinfeld, who has by far the most screen time of any of the players--the actors all seem to be having a great time with the often broadly droll material.

And the film is, more often than not, visually exquisite. All That Heaven Allows and Velvet Goldmine aside, rarely in cinema have I seen such peculiarly, gorgeously artificial starlit nights and snowfalls, or such finely framed and lit silhouettes of characters against various evocative skies, as the Coens and DP Roger Deakins offer us here. There is a peculiar elegance to the proceedings that, at the same time it renders them perhaps too formal, does remind us that we're in the hands of those reticently cinephilic fraternal pranksters we know and love.

Still, there's nothing in True Grit that convinced me that anyone felt, in any deep way, that it really needed to be made. It's neither a passion project nor an update (and thank heaven for that--I can't even name the Coens' last, awful remake, which was a very ill-advised attempt to update its original). True Grit is simply an experiment that's more successful than not, a pleasant-enough placeholder between the much richer A Serious Man and...?