"PARALLEL LINES"
Having recently revisited, in succession, Anton Corbijn's The American (2010) and Jean-Pierre Melville's Le Cercle Rouge (1970), I was struck by the literally profound similarities between the two. While quite disparate in terms of plot particulars, they have in common a style, an approach, a worldview--an aura--that transcends narrative specifics to render them metaphysical siblings, brothers of the soul. Each adheres more or less consistently to an anti-psychological, existentialist method to hone its narrative into an act of strikingly pure storytelling--narrative pleasure for narrative pleasure's sake.

The most immediately noticeable shared attribute is the type of figure central to each film, as well as the ways in which the characters are presented to us. Both The American's "Jack," mercenary arms dealer, and Le Cercle Rouge's "Corey" (Alain Delon), "Vogel" (Gian Maria Volonté) and "Jansen" (Yves Montand)--a just-released convict, a prison escapee, and a detoxing ex-cop--are narratively unburdened, unadorned with the personal history and psychology frequently proffered to explain a character's motives. (Those scare quotes are partly because the names are unlikely to be the characters' given names, but primarily because signifiers like names seem particularly arbitrary in the world of these films.) Their principal attribute is that they are true professionals, quasi-criminals by vocation who nevertheless embody a certain relentless perfectionism and skill that the films easily allow us to read as a kind of pure, amoral integrity. They, like the films themselves, are of a supremely controlled temperament, utterly familiar with and accepting of the life-or-death scenarios endemic to their work. The prevailing mood, regardless of event, is calm, acutely aware detachment, which is provided in each film via stark lighting, composition, mise-en-scène, camera movement, and performance. Words are spare, functional, kept to a minimum; the focus is on action, though the action in these films is so deliberate, elegant, and unfrenzied as to exempt them from being categorized as anything like what is typically identified as an "action" film.

From the characters' behaviors and the measured, unemphatic ways in which they're played out, we may infer that on the films' terms, the barrier supposedly dividing crime from straight society is illusory. Both films offer us a representative of society's laissez-faire, default "morality": In The American, a priest with a less than pristine past is the emissary of morality who cannot judge Jack; he can suggest spiritual salvation in deference to the obligations of his vocation only while treading gently and respectfully in the face of the commitments required by Jack's own, equally rigorous calling. Mattei, the detective pursuing protagonists of Le Cercle rouge, is no stranger to shady methods and achieves his goal at the price of realizing the artificiality of the moral distinctions he had presumed separated him him from his quarry. What would passively, complacently represent unequivocal morality in a more ordinary (read: more naïve or disingenuous/hypocritical) film is thereby used to question--more explicitly in Le Cercle rouge than in The American--the automatic clearness of any individual's conscience, whichever side of society's or the state's dividing lines they may find themselves on.

This unblinking, pared-down, everything-gray approach--neither cynical nor desperate nor sentimental, just persuasively stoic and equilibrated--eliminates any good-vs.-evil, black hats vs. white hats banality from obstructing the streamlined forward thrust of these films. Characterization is eschewed in favor of a sort of simultaneous universality and anonymity--these characters could be anybody, or they could be nobody. All we need to know about them, all that individuates them, the only real truth, is the actions we witness them performing onscreen, not "who they are," which is something we never learn and are not compelled to be much interested in. 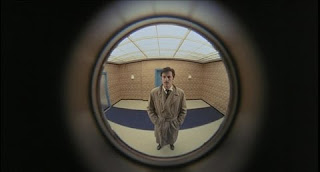 Such a thorough and well-supported check on the heroes/villains dichotomy liberates the films from the imperatives of identification or picking sides; the resulting sense of inevitability and fatalism allows for a level of abstraction that, far from rendering the films unengaging, is the salient feature that makes them so irresistibly fascinating and gratifying. These are not humanistic descendants of neorealism, whose projects would necessarily be to find a way of bypassing or conquering the inevitable fact that they are fictions imagined, designed, and executed--contrived, well or badly, as all fictions always are--by an unseen author or authors. Instead, Corbijn's and Melville's films revel in their fictional status, which is not to say that they're "postmodern"; the self-consciousness of these films is serious and determined, cerebral, much less corrosive of the fiction than the more playful or autocritical self-reflexiveness on display in, respectively, Tarantino and Godard. A remarkable microcosm of this self-awareness approaching abstraction can be found in the heavy emphasis placed on characters against huge, empty landscapes (rural Italy in The American, rural France in Le Cercle rouge) traveling or being propelled on set routes through vast, rather unvariegated spaces--e.g., the very long wide-angle and overheads shot of Jack driving through the Italian countryside in The American, or the very slow pullback on the train carrying Vogel and Mattei near the beginning of Le Cercle rouge, which takes us from a close-in two-shot through the train's window all the way out to a perspective so distant as to nearly create the image of nothing more than a sleek object traversing a linear path through space. 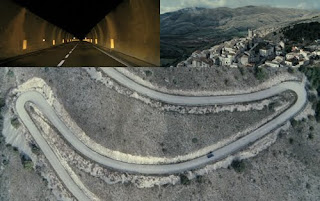 Underlining this tendency to abstraction, our attention is consistently drawn to strategy, construction, objects in a playing field. Both films feature long sequences of a protagonist meticulously and painstakingly handling and perfecting a gun, the tool of his trade, forming it step by step to meet the exact requirements of a planned job. (This is especially resonant in the case of Le Cercle rouge's Jansen, an ex-cop now employing his firearm and artillery skills for a heist; his true loyalty is to the infinitesimally exact demands for perfection made upon him by the skill he practices, whether for police or thieves.) And that very wide overhead shot from The American has an analogue in a wonderfully composed shot, also from overhead, in Le Cercle rouge: the top of a pool table fills the screen, an image of vast green against which small, isolated billiard balls are made to roll, knock against each other, move in unpredictable directions but as a clear result of play. These portions of the films are visually arresting and wholly relevant to the story being told; but they are also perfect visual analogies representing the elegant constructions, manipulations, and machinations of the film's fiction itself. 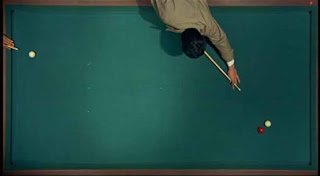 The proposition that the characters in these particular works are no more than billiard balls made to move against the smooth green surface of the film's visuals, situations, and milieux should be read as praise, not criticism; nor should the word "machinations" imply "mechanical" in the derogatory sense in which that descriptor is often used. Far from being zombie-like, dispassionate, or dull, the experience offered by these films is more akin to that of hearing a perfectly assembled and calibrated engine purring beneath the hood of a fine automobile, then being offered a glimpse of the engine itself, in all its perfection, each part working at the top of its exquisite form while complementing and enhancing the others. And these machines produce something rare and valuable: the narrative pleasure of romantic doom-- "pure" integrity, unfettered by pious cliché, in the face of inevitable failure (for everyone, sooner or later); and the aesthetic/visual pleasures of the highly self-aware, precise deployment of the primary elements in the cinematic palette: space, time, light, composition, and color. 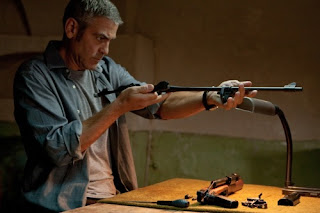 The result of the rigor demonstrated by The American and Le Cercle rouge--perhaps more strictly observed by the latter, but indispensable to either film's achievement--is that both films are masterpieces of the ice-cold entertainment*. Their essentially escapist dedication to an acutely well-told story and nothing more or less, combined with their principled refusal of any of the tiresome commonplaces that escapism has unfortunately come to imply (unsatisfying happy endings, pandering wish-fulfillment/identification, condescending and cynical sentimentality) places them in a category of greatness as distinct from the morally compelled distance and deliberateness--the "coldness"--of Bresson, Kiarostami, or Michael Haneke as from the warm observational humanism of Hiroshi Shimizu or Mike Leigh. They are films that, despite their superbly cultivated aura of awesome gravity, might greatly please Oscar Wilde: they exist for their own beauty, symmetry, and precision, not for the sake of any affirmation or lesson. They commit themselves wholeheartedly to no less admirable and difficult a task than taking pure cinematic pleasure seriously.

*Le Samouraï, Melville's 1967 film also starring Delon, is remarkable in its own right as a captivating foray into the aesthetic territory later laid claim to by Le Cercle rouge.